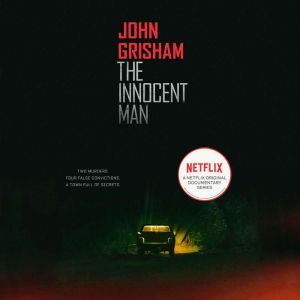 The Innocent Man: Murder and Injustice in a Small Town

When Ron Williamson signed with the Oakland A’s in 1971, he said goodbye to his hometown of Ada and left to pursue his dreams of big-league glory. Six years later he was back, his dreams broken by a bad arm and bad habits. He moved in with his mother and slept twenty hours a day on her sofa.
In 1982, a twenty-one-year-old cocktail waitress in Ada named Debra Sue Carter was raped and murdered, and for reasons that were never clear, they suspected Ron Williamson and his friend Dennis Fritz. The two were arrested and charged with capital murder.
The prosecution’s case was built on junk science and the testimony of jailhouse snitches and convicts. Dennis Fritz was found guilty and given a life sentence. Ron Williamson was sent to death row.
If you believe that in America you are innocent until proven guilty, this audiobook will shock you. If you believe in the death penalty, this book will disturb you. If you believe the criminal justice system is fair, this book will infuriate you.

Slow moving. Repeats the story over and over. You can find a better John Grisham to read

I had a hard time getting absorbed by this one...I did not recommend it to my friend who often commutes while tired, I thought this reader might put her to sleep. But I stuck with it and by the end of disc 3 I was hooked. It is a lesson about our judicial system I will never forget. I was on the fence regarding the death penalty before listening to this book, now I'm definitely opposed to it. It is a true story, so naturally the facts have to be represented which makes it less entertaining than a purely 'made up' story, but in the end I had to give it 4 stars.

I didn't realize, when I first started the book, that it was to be a do***entary. I found it hard to get into at first and was disappointed as I am a big Grisham fan. However, once it dawned on me that it was, in fact, a true story, I listened with a 'different ear'. This, especially since I personally know someone in jail for something he didn't do. Because of my personal experience I could truely relate to the story and to the legal machinations. I was on the fence regarding the death penalty when I first met the innocent man I know and through that experience became guardedly against it. Now, after hearing this stroy, I will argue against anyone that is pro death penalty. This book provided everything I needed to understand completely the real issues at stake. It also, however, deepened dramatically, my belief that our judicial system needs a serious overhaul. I am going to the bookstore and buying at least a dozen copies of this book and gifting it a number of people I know could use an awakening. Grisham came through in spades!!!

This is a very boring book! It is the fitst time I had to stop listening and send a book back. Sorry.