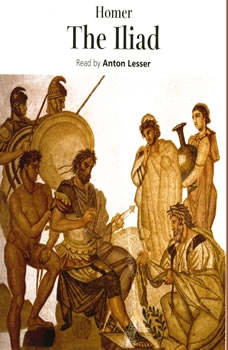 One the earliest and greatest epic poems of the Western world, The Iliad tells the story of fifty critical days towards the end of the Trojan war. Achilles has quarrelled with Agamemnon and sulks in his tent while Hector brings his Trojans to the brink of victory; but fate will have the last word. While the heroes fight before the walls of Troy the gods have also drawn up battle lines, and it is their disagreements as much as the heroes’ efforts which will decide the conflict. Despite the poem’s antiquity, the very real, human qualities of the protagonists and their dilemmas make The Iliad immediately accessible, especially in the hands of a master story-teller such as Anton Lesser. The Iliad was composed in the eighth century B. C. almost certainly as an oral composition incorporating a number of different stories from a rich poetic tradition of works now lost to us. The identity of Homer has been fiercely but inconclusively debated since ancient times. The Greeks believed he was a single person, and various cities competed for the honour of naming him a citizen. However, nothing reliable is known about him, although some traditions insist that he was blind. The poem was originally designed for recitation on important occasions by a professional bard, at least until the sixth century B. C. when, according to Greek traditions, the Athenian tyrant Peisistratus had the poem written down and codified in a form similar to the work we know today.

The Inferno
by Dante

The Aeneid
by Virgil