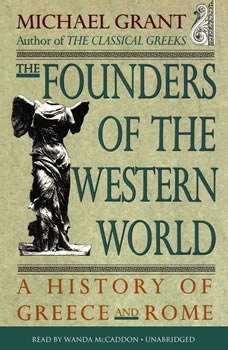 The Founders of the Western World: A History of Greece and Rome

Through his in-depth analysis, Michael Grant introduces us to the political, military, cultural, social, economic, and religious life of the times that were the building blocks of what we now call the Western World. He creates a vivid panorama of the Greco-Roman world by bringing together the most dramatic events on record from its beginnings in 1,000 BC to the fall of the western Roman Empire in the fifth century AD. The Founders of the Western World covers the rise and development of the Greeks, the Greek city states, classical Greece and its relations with Persia, Alexander and his successors, life in Hellenistic Greece, early Rome and the Etruscans, the Roman Republic and its imperial development, the Augustan age, Rome after Augustus, Constantine’s conversion and the founding of Constantinople, and the fall of the Roman West.