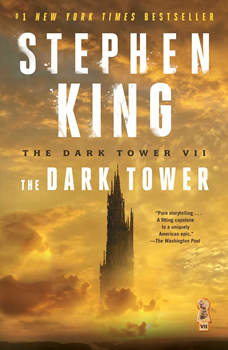 Now a major motion picture starring Matthew McConaughey and Idris ElbaAll good things must come to end. Constant Listener, and not even Stephen King can write a story that goes on forever. The tale of Ronald Deschain's relentless quest for the Dark Tower has, the author fears, sorely tried the patience of those who have followed it from its earliest chapters. But attend to it a while longer, if it pleases you, for this volume is the last, and often the last things are best. Roland's ka-tet remains intact, though scattered over wheres and whens. Susannah-Mia has been carried from the Dixie Pig (in the summer of 1999) to a birthing room -- really a chamber of horrors - in Thunderclap's Fedic Station; Jake and Father Callahan, with Oy between them, have entered the restaurant on Lex and 61st with weapons drawn, little knowing how numerous and noxious are their foes. Roland and Eddie are with John Cullum in Maine, in 1977, looking for the site on Turtleback Lane where "walk-ins" have been often seen. They want desperately to get back to the others, to Susannah especially, and yet they have come to realize that the world they need to escape is the only one that matters. Thus the audiobook opens, like a door to the uttermost reaches of Stephen King's imagination. You've come this far. Come a little father. Come all the way. The sound you hear may be the slamming of the door behind you. Welcome to The Dark Tower.

I know everyone thinks Stephen King is a great writer and and I know he has a large following, but I just do not like his style or stories. Dont get me wrong, some of it is OK, but most of it is just not what I want to spend my time reading. I know people are going to say, then dont read it and they are right, but I keep trying and when I see high marks for a book like this one, i give it a try again. I guess the only good thing I can say is that I didnt spend my money and buy it, I just rented it. thanks for the save again Books Free!