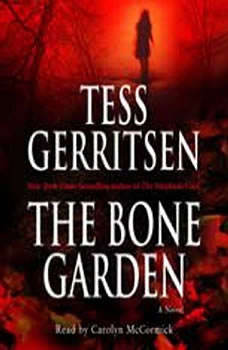 Present day: Julia Hamill has made a horrifying discovery on the grounds of her new home in rural Massachusetts: a skull buried in the rocky soil–human, female, and, according to the trained eye of Boston medical examiner Maura Isles, scarred with the unmistakable marks of murder.

Boston, 1830: In order to pay for his education, medical student Norris Marshall has joined the ranks of local “resurrectionists”–those who plunder graveyards and harvest the dead for sale on the black market. But when a distinguished doctor is found murdered and mutilated on university grounds,
Norris finds that trafficking in the illicit cadaver trade has made him a prime suspect.

With unflagging suspense and pitch-perfect period detail, The Bone Garden deftly traces the dark mystery at its heart across time and place to a finale as ingeniously conceived as it is shocking.

The Apprentice
by Tess Gerritsen

Jane Rizzoli and Maura Isles—the inspiration for the hit TNT series—continue their crime-solving streak. The bestselling author of The Surgeon returns—and so does that chilling novel’s diabolical villain. Thoug...

This was a great book. I read it in a day. Tess Gerritsen has become one of my favorite authors. She never fails to capture my attention and keep it. If you love mysteries this is a great read.