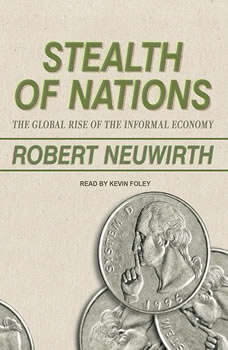 Stealth of Nations: The Global Rise of the Informal Economy

Thousands of Africans head to China each year to buy cell phones, auto parts, and other products that they will import to their home countries through a clandestine global back channel. Hundreds of Paraguayan merchants smuggle computers, electronics, and clothing across the border to Brazil. Scores of laid-off San Franciscans, working without any licenses, use Twitter to sell home-cooked foods. Dozens of major multinationals sell products through unregistered kiosks and street vendors around the world. When we think of the informal economy, we tend to think of crime: prostitution, gun running, drug trafficking. Stealth of Nations opens up this underground realm, showing how the worldwide informal economy deals mostly in legal products and is, in fact, a ten-trillion-dollar industry, making it the second-largest economy in the world, after that of the United States. Having penetrated this closed world and persuaded its inhabitants to open up to him, Robert Neuwirth makes clear that this informal method of transaction dates back as far as humans have existed and traded, that it provides essential services and crucial employment that fill the gaps in formal systems, and that this unregulated market works smoothly and effectively, with its own codes and unwritten rules. Combining a vivid travelogue with a firm grasp on global economic strategy—along with a healthy dose of irreverence and skepticism toward conventional perceptions—Neuwirth gives us an eye-opening account of a world that is always operating around us, hidden in plain sight.