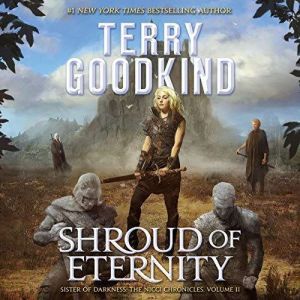 Shroud of Eternity: Sister of Darkness

Shroud of Eternity picks up where Terry Goodkind’s New York Times bestseller Death’s Mistress left off, promising a thrilling brew of bloodshed, sex, deception, and sorcery.The formidable sorceress Nicci and her companions—the newly powerless Nathan and the youthful Bannon—set out on another quest after driving ruthless Norukai slavers out of Renda Bay. Their mission: restore Nathan’s magic and, for Nicci, save the world.Guided by the witch-woman Red’s mysterious prophecy, the trio makes their way south of Kol Adair towards a wondrous city shrouded behind time, Ildakar. But the grotesque omens on their path to Nathan’s salvation—severed Norukai heads on pikes, a genetically modified monster, and a petrified army of half a million—are just a taste of the unimaginable horrors that await within the Shroud of Eternity.The Nicci Chronicles1. Death’s Mistress2. Shroud of Eternity3. Siege of Stone 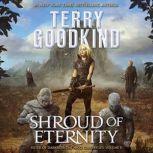 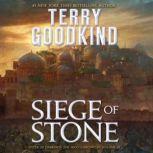 Shroud of Eternity: Sister of Darkn...
The Nicci Chronicles #2