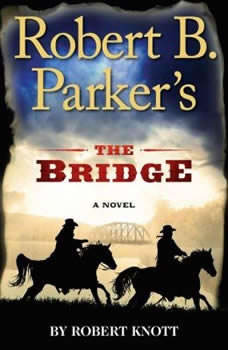 Robert B. Parker's The Bridge

Series: A Cole and Hitch Novel #7

Territorial Marshals Virgil Cole and Everett Hitch are back in Appaloosa, where their work enforcing the law has been exceptionally quiet. All that is about to change. An ominous storm rolls in, and along with it a band of night riders with a devious scheme, who show up at the Rio Blanco camp, where a three-hundred-foot bridge is under construction.

Appaloosa’s Sheriff Sledge Driskill and his deputies are the first to respond, but as the storm grows more threatening, news of troubles at the bridge escalate and the Sheriff and his deputies go missing.

Virgil and Everett saddle up to sort things out but before they do the hard drinking, Beauregard Beauchamp arrives in Appaloosa with his Theatrical Extravaganza troupe and the promise of the best in lively entertainment west of the Mississippi. With the troupe comes a lovely and mysterious fortune-teller who is set on saving Everett from imminent but indefinable danger.

The trouble at the bridge, the missing lawmen, the new arrivals, and Everett’s shoot-out in front of Hal’s Café aren’t the only things on Cole and Hitch’s plate as a gang of unsavory soldiers ease into town with a shady alibi, shadier intentions, and a soon-to-be-discovered wake of destruction.

As clouds over Appaloosa continue to gather, things get much worse for Cole and Hitch…

Robert B. Parker's Revelation
A Cole and Hitch Novel #9