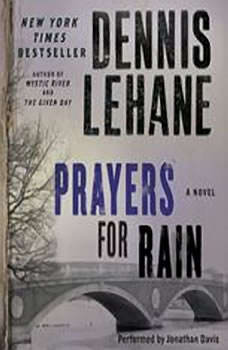 When a former client jumps naked from a Boston landmark, Private Investigator Patrick Kenzie wants to know why. Once a perky young woman in love with life, her suicide is the final fall in a spiral of self-destruction.What Kenzie discovers is a sadistic stalker who targeted the woman and methodically drove her to her death – a monster that the law can’t touch. But Kenzie can. He and his former partner, Angela Gennaro, will fight a mind-twisting battle against the psychopath, even as he turns tricks on them…Prayers for Rain is another superior thriller from Dennis Lehane, the bestselling and acclaimed author of Mystic River, Shutter Island, and Gone, Baby, Gone.

Katie Wilkinson has found her perfect man at last. He's everything she imagined she wanted in a partner. But one day, without explanation, he disappears from her life, leaving behind only a diary for her to read. This diary is a love letter written...

Damaged Portland detective Archie Sheridan spent ten years tracking Gretchen Lowell, a beautiful serial killer, but in the end she was the one who caught him. Two years ago, Gretchen kidnapped Archie and tortured him for ten days, but instead of kil...

The scent is unmistakable – gardenias, sweet and delicate, the same perfume that his beautiful first wife, Jennifer, always wore. Opening his eyes in the hospital room where he’s recovering from an accident, New Orleans detective Rick Be...

With Heartsick, Chelsea Cain took the crime world by storm, introducing two of the most compelling characters in decades: serial killer Gretchen Lowell and her obsessed pursuer Portland Detective Archie Sheridan. The book spent four weeks on the New...