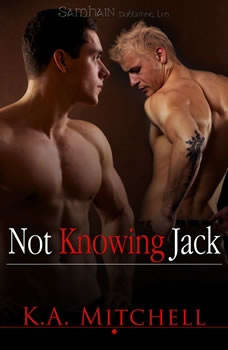 Bartender Tony Gemetti has it all: a rich, hot boyfriend, a McMansion in the ’burbs and unlimited sex in an expectation-free zone. He thought that was all he ever wanted out of any relationship—until Jack begins making excuses for frequent disappearances. Realizing he has more than his libido and enough drawers for his T-shirt collection riding on this relationship, Tony figures it’s time to find out what’s going on. Jack Noble has spent his life hiding his real self behind a carefully created image. With Tony, he finally knows real freedom, real happiness. Now a past of buried secrets and lies is closing in, and no matter how hard he tries to stop it, the truth is tearing through. Once Tony learns what kind of man Jack really is, he won’t stay. Jack’s sure of it. Suddenly the past shows up in a completely unexpected way, testing the boundaries of their old, coasting-along-on-fun relationship. Tony indeed finds that Jack isn’t the man he went looking for, but it’s too late. There’s too much at stake to just walk away. First, though, he has to make sure there are no lies left for Jack to hide behind. Warning: Readers should be free of any heart condition that may be affected by a hero with an overactive imagination, painful back stories, and hot sex in a variety of athletic positions. Neither the author nor the publisher is responsible for any sudden or frequent urges to have children with Tony Gemetti.