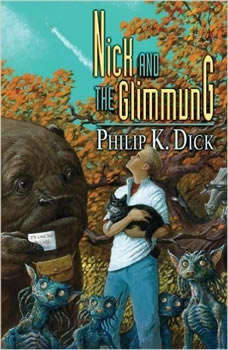 Nick has a problem. He has a cat named Horace, and cats are quite illegal on Earth. In fact all pets are illegal on Earth, and Horace has been reported to the anti-pet man. The only way for Nick and his family to keep Horace is to emigrate to Plowman’s Planet.Little did they know that, rather than the pastoral paradise Nick’s father envisioned, they would land in the middle of a planetwide war against an entity known as Glimmung, a conflict in which Nick and Horace would play a pivotal role.Nick and the Glimmung is Philip K. Dick’s sole surviving young adult novel.