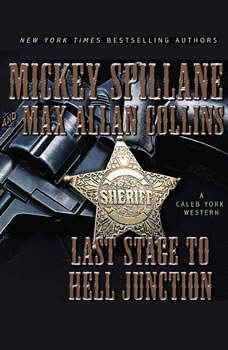 New York Times bestselling author Max Allan Collins again brings to life the legacy of crime-writing legend Mickey Spillane in another explosive chapter in this now-classic western saga. Caleb York has a tin star, a blazing gun, and plenty of courage. All he needs is a little luck to deliver big justice . . . On a lively night at the Victory saloon in Trinidad, New Mexico, Sheriff Caleb York interrupts his poker game to settle a minor dust-up that raises the stakes into major trouble. The wounded miscreant he ushers to the hoosegow spills the secret behind the mysterious disappearance of a certain stage coach. Bound for Denver, the stage carried three important passengers-beautiful ranch owner Willa Cullen, lovely temptress Rita Filley, and wealthy banker Raymond L. Parker. The two women are rivals for the lawman's love, while Parker is a key investor in Trinidad's future. But all are gone, with only the corpses of fellow passengers as bullet-ridden clues. York follows a trail of blood to a ghost town known as Hell Junction. To rescue his lady friends and the banker, he must infiltrate an outlaw den . . . and pray no one among the thieves, killers, and kidnappers will recognize him. With only his desert rat deputy to back him up, York must free the captives, round up the badmen-and, whenever necessary, send them straight to Hell.