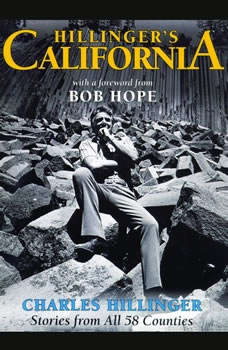 The California that Charles Hillinger writes about is not the stereotypical land of movie stars, sensational trials, or tourist snapshots. Instead, he reveals a patchwork of incredible variety and uniqueness in the outoftheway places and everyday people found throughout this remarkable state. As a Los Angeles Times columnist who wrote thousands of humaninterest stories during fortysix years of traveling the world, Charles Hillinger hones in on what makes each of Californias counties different from the others. Listeners learn about the man who flew an airplane long before the Wright Brothers did, the church with stainedglass windows commemorating preachers who were murdered or accidentally killed, and the museum with the largest collection of mummies on the West Coast. The stories are downtoearth without excessive sentiment or philosophy.

Acclaimed author Win Blevins’ Stone Song won the Spur Award and the Mountains and Plains Booksellers Award. In Give Your Heart to the Hawks, Blevins offers a tribute to the “first Westerners” who explored the Great American West. S...

In the last three decades of the nineteenth century, an American buffalo herd once numbering 30 million animals was reduced to twenty-three. It was the era of Manifest Destiny, a gilded age that viewed the West as nothing more than a treasure chest ...