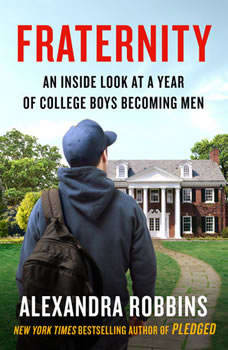 Fraternity: An Inside Look at a Year of College Boys Becoming Men

The New York Times bestselling author of Pledged is back with an unprecedented fly-on-the-wall look inside fraternity houses from current brothers’ perspectives—and a fresh, riveting must-read about what it’s like to be a college guy today.

Two real-life stories. One stunning twist. Meet Jake, a studious freshman weighing how far to go to find a brotherhood that will introduce him to lifelong friends and help conquer his social awkwardness; and Oliver, a hardworking chapter president trying to keep his misunderstood fraternity out of trouble despite multiple run-ins with the police.

Their year-in-the-life stories help explain why students are joining fraternities in record numbers despite scandalous headlines. To find out what it’s like to be a fraternity brother in the twenty-first century, Robbins contacted hundreds of brothers whose chapters don’t make headlines—and who suggested that many fraternities can be healthy safe spaces for men.

Fraternity is more than just a page-turning, character-driven read. It’s a vital book about the transition from boyhood to manhood; it brilliantly weaves psychology, current events, neuroscience, and interviews to explore the state of masculinity today, and what that means for students and their parents. It’s a different kind of story about college boys, a story in which they candidly discuss sex, friendship, social media, drinking, peer pressure, gender roles, and even porn. And it’s a book about boys at a vulnerable age, living on their own for perhaps the first time. Boys who, in a climate that can stigmatize them merely for being male, don’t necessarily want to navigate the complicated, coming-of-age journey to manhood alone.

An exclusive look inside the power and politics of college fraternities in America as they struggle to survive despite growing waves of criticism and outrage. College fraternity culture has never been more embattled. Once a mainstay of campus life...

The Nurses
by Alexandra Robbins

Nursing is more than a career; it's a calling, and one of the most important fascinating, and dangerous professions in the world. As the frontline responders battling traumas, illnesses, and aggression from surprising sources, nurses are remarkable...

This 20th-anniversary edition of the extraordinary New York Times bestseller features a new introduction from the author!"Stiffed is a brilliant, important book.. Faludi's reportorial and literary skills unfold with breathtaking confi...

One of the enduring legacies of the 2012 Presidential campaign was the demise of the white American male voter as a dominant force in the political landscape. On election night, after Obama was announced the winner, a distressed Bill O'Reilly lament...

Why Young Men
by Jamil Jivani

Across the world, we see an explosion of unpredictable violence committed by alienated young men. Jamil Jivani recounts his experiences working as a youth activist throughout North America and the Middle East, drawing striking parallels between ISIS...

Are Men Animals?
by Matthew Gutmann

"Boys will be boys," the saying goes -- but what does that actually mean? A leading anthropologist investigatesWhy do men behave the way they do? Is it their male brains? Surging testosterone? From vulgar locker-room talk to mansplaining to sexual ...

In You Throw Like a Girl, former Syracuse University quarterback and NFL veteran Don McPherson examines how the narrow definition of masculinity adversely impacts women and creates many "blind spots" that hinder the healthy development of men.

Men Without Work
by Nicholas Eberstadt

By one reading, things look pretty good for Americans today: the country is richer than ever before and the unemployment rate is down by half since the Great Recession. But a closer look shows that something is going seriously wrong. This is the c...

"While it may seem as if we live in a man's world," reports Pollack, "we do not live in a boy's world." Many boys today are struggling either silently, with low self-esteem and feelings of loneliness and isolation, or publicly, by acting out feeling...