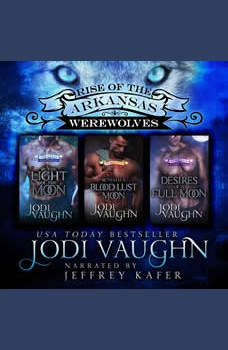 By The Light Of The Moon, Beneath A Blood Lust Moon, Desires of a Full Moon Boxset 1-3: Rise of the Arkansas Werewolves Boxset 1-3

Series: Rise of The Arkansas Werewolves

By The Light Of The Moon

Wild. Untamed. Blazing with need. She can't avoid being burned.

With the entire werewolf pack hunting them, there is nothing Damon can do now but keep her close...and let their passion burn.

Beneath A Blood Lust Moon

He’ll stop at nothing to protect her…even if it means hunting a killer.

Werewolf Braxton Devereaux is on the run. Accused of a murder he didn’t commit, he is forced to flee Pack Law, and the death sentence waiting for him. On the run from deadly assassins, he is nearly out of their reach when an assassin’s bullet hits its mark. Wounded, in pain, his wolf seeks shelter in the form of an unsuspecting and very beautiful woman.

Braxton has a reason to stay and fight, to uncover the truth. Kate is his reason now, and he’ll stop at nothing to protect her…even if it means hunting a killer.

Desires of A Full Moon

Does he deserve a second chance with the woman he once loved but failed to protect?

Haley never wanted to see Jayden Parker again. Not his eyes. Not his smile. Not one inch of him. The fact that he’s the one the Pack sent to protect her forces her to face a past that has haunted her every day since Jayden walked away. Memories of their undeniable passion torment her needy body even as every moment she spends with him reinforces the walls around her heart.

Danger stalks their every move. But Jayden is a guardian. A werewolf. Haley knows Jayden would lay down his life to save her own…but what will he sacrifice to heal her broken heart?

Rise of The Arkansas Werewolves Bundle

By The Light Of The Moon, Beneath A...
Rise of The Arkansas Werewolves

By The Light Of The Moon
Rise of The Arkansas Werewolves

Beneath A Blood Lust Moon
Rise of The Arkansas Werewolves