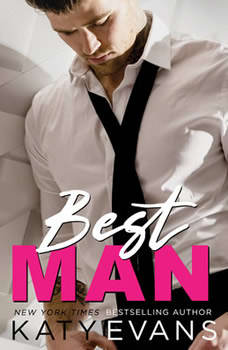 The latest standalone novel from bestselling author Katy Evans. When the wedding of your dreams is just around the corner, everything needs to go as planned. Only problem is, the groom didn’t get the memo. Aaron forgot the rings, and Lia is determined to make the long drive home to get them in time for their “I do’s.” But there’s a catch. There always is with Aaron, isn’t there? Aaron is too hungover to come, and sends a replacement. The best man. Miles Foster. The cocky, arrogant, sexy best man…and the last person Lia wants to be trapped in a car with for hours. But Aaron insists, and Lia wonders if there’s another reason Aaron wants Miles tagging along—aside from sticking her with a hot, surly babysitter. Yet how bad can it be? It’ll be over before she knows it, and she’ll never see him again. Just like in college. But when secrets are revealed, and Lia’s whole world is turned upside down, she realizes she’s been living a lie—and so has her groom. Miles is supposed to be the best man at her wedding. But what if he is simply the best man she has ever known? The best man for her?