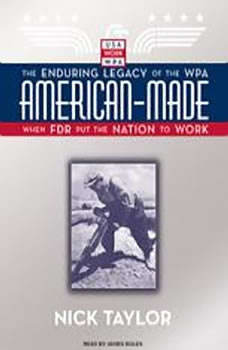 American-Made: The Enduring Legacy of the WPA: When FDR Put the Nation to Work

When President Roosevelt took the oath of office in March 1933, he was facing a devastated nation. Four years into the Great Depression, a staggering 13 million American workers were jobless and many millions more of their family members were equally in need. Desperation ruled the land. What people wanted were jobs, not handouts—the pride of earning a paycheck. And in 1935, after a variety of temporary relief measures, a permanent nationwide jobs program was created. This was the Works Progress Administration (WPA), and it would forever change the physical landscape and the social policies of the United States. The WPA lasted for eight years, spent $11 billion, employed 8.5 million men and women, and gave the country not only a renewed spirit but a fresh face. Under its colorful head, Harry Hopkins, the agency's remarkable accomplishment was to combine the urgency of putting people back to work with its vision of physically rebuilding America. Its workers laid roads and erected dams, bridges, tunnels, and airports. They stocked rivers, made toys, sewed clothes, and served millions of hot school lunches. When disasters struck, they were there by the thousands to rescue the stranded. And all across the country the WPA's arts programs performed concerts, staged plays, painted murals, delighted children with circuses, and created invaluable guidebooks. Even today, more than sixty years after the WPA ceased to exist, there is almost no area in America that does not bear some visible mark of its presence. Politically controversial, the WPA was staffed by passionate believers and hated by conservatives; its critics called its projects make-work, and wags said WPA stood for "We Piddle Around." The contrary was true. We have only to look about us today to discover its lasting presence.