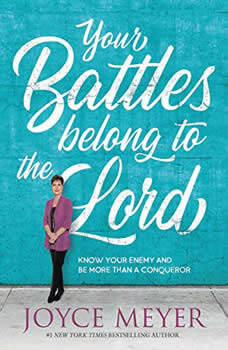 Your Battles Belong to the Lord: Know Your Enemy and Be More Than a Conqueror

Put on the armor of God, conquer your problems, and know your real enemy with renowned Bible teacher and New York Times bestselling author, Joyce Meyer.Have you ever felt you tried every solution on earth to solve a problem, but nothing worked? Have you ever wondered where the difficulties you face are coming from? Joyce Meyer has answers.In Your Battles Belong to the Lord, Meyer explains that while some problems may result from a person's choices or circumstances, others are rooted in the spiritual realm. Once you recognize the devil--who is real and active in the world today--as your true enemy and the source of many of your struggles, you can overcome them and live a life of peace, freedom, faith and victory. When facing life's battles, there are certain things you must do for yourself, such as: Diligently studying and applying God's WordTrusting HimPrayingMaintaining a positive attitude and thankful heartBut there are other things only God can do. When you do your part, God does His-and He is always ready and eager to defend you and help you.Each chapter of the book helps you understand how the enemy operates and learn to counter his schemes and strategies so you can live at a new level of strength. Chapter titles include: "Know Your Enemy," "Eliminate Fear," "How the Devil Tries to Deceive People," "Hold Your Peace," "The Power of a Thankful Life," and "Internal Rest."In this fresh approach to the subject of spiritual warfare, Meyer focuses not only on the nature and strategies of the enemy, but also on the power and love of God, who always defeats the enemy and leads you to triumph. No matter how difficult your challenges are, if you have God with you, you have all you need to win every battle.

The Invisible War
by Chip Ingram

The Final Quest
by Rick Joyner

Eyewitness to Miracles
by Randy Clark

Possessing the Gates of the Enemy
by Cindy Jacobs