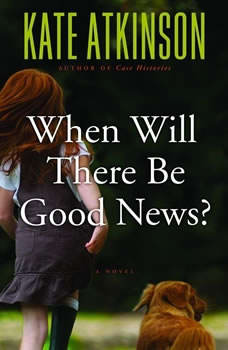 When Will There Be Good News?

The third installment in Kate Atkinson's wildly beloved series of Jackson Brodie Mysteries: a complex tale of murder, coincidence, and connected lives."As a reader, I was charmed. As a novelist, I was staggered by Kate Atkinson's narrative wizardry." --Stephen King On a hot summer day, Joanna Mason's family slowly wanders home along a country lane. A moment later, Joanna's life is changed forever...On a dark night thirty years later, ex-detective Jackson Brodie finds himself on a train that is both crowded and late. Lost in his thoughts, he suddenly hears a shocking sound...At the end of a long day, 16-year-old Reggie is looking forward to watching a little TV. Then a terrifying noise shatters her peaceful evening. Luckily, Reggie makes it a point to be prepared for an emergency...These three lives come together in unexpected and deeply thrilling ways in the latest novel from Kate Atkinson, the critically acclaimed author who Harlan Coben calls "an absolute must-read."

Careless in Red
by Elizabeth George

In her most eagerly anticipated novel yet, Elizabeth George brings back Scotland Yard's Thomas Lynley to investigate a ruthless crime.After the senseless murder of his wife, Detective Superintendent Thomas Lynley retreated to Cornwall, where he has ...