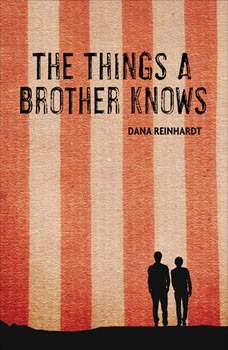 The Things a Brother Knows

The story of a young marine’s return from war in the Middle East and the psychological effects it has on his family.

Finally, Levi Katznelson’s older brother, Boaz, has returned. Boaz was a high school star who had it all and gave it up to serve in a war Levi can’t understand. Things have been on hold since Boaz left. With the help of his two best friends Levi has fumbled his way through high school, weary of his role as little brother to the hero.

But when Boaz walks through the front door after his tour of duty is over, Levi knows there’s something wrong. Boaz is home, safe. But Levi knows that his brother is not the same.

Maybe things will never return to normal. Then Boaz leaves again, and this time Levi follows him, determined to understand who his brother was, who he has become, and how to bring him home again.

Award-winning author Dana Reinhardt introduces readers to Levi, who has never known what he believes, and whose journey reveals truths only a brother knows.