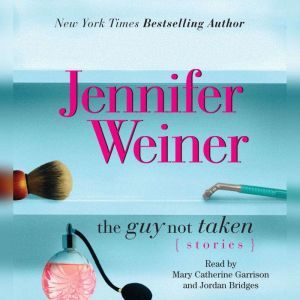 The Guy Not Taken: Stories

A selection of unabridged stories from the bestselling author of Goodnight Nobody Jennifer Weiner's talent shines like never before in this collection of short stories, following the tender, and often hilarious, progress of love and relationships over the course of a lifetime. From a teenager coming to terms with her father's disappearance to a moving portrait of men's fears about commitment and love, Weiner's stories explore those transformative moments in our every day. We meet Marlie Davidow, home alone with her new baby late one Friday night, when she wanders onto her ex's online wedding registry and wonders what if she had wound up with the guy not taken. We stumble on Good in Bed's Bruce Guberman, liquored-up and ready for anything on the night of his best friend's bachelor party, until stealing his girlfriend's tiny rat terrier becomes more complicated than he'd planned. We find Jessica Norton listing her beloved New York City apartment in the hope of winning her broker's heart. And we follow an unlikely friendship between two very different new mothers, and the choices that bring them together -- and pull them apart. The Guy Not Taken demonstrates Weiner's amazing ability to create characters who "feel like they could be your best friend" (Janet Maslin) and to find hope and humor, longing and love in the hidden corners of our common experiences.

My trust and admiration were earned quickly by the seemingly effortlessness of the prose, acute observations of things and people rendered plainly, so as to make them familiar, and dialogue so natural you'd swear you were listening in at a keyhole. These stories investigate the struggle to trust in the promise of contentment, a balance of independence (personal achievement) and compromise (love or marriage), in the wake of childhood experiences of loss or neglect. Weiner's magic is in taking those everyday physical details--the tight jeans and pink, nubby sweater or striped tie and creased pants--that finds us unquestioningly and rapidly pigeonholing someone into a comfortable socio-economic box. Her characters may judge one another, but Weiner doesn't. Her empathy is as far-reaching as her talent. Hence, she is able to crush that comfortable box and show the dimensions of character that ***umptions flatten. The clean unadorned writing exposes, in a flash, stroke, or dribble of melted ice-cream, characters' complex emotional and psychological states. Because Weiner's stories are character driven, the handful of less successful stories roll characters thinly, priority shifting to plot device or, in some stories, I suspect, to 'fact,' the triggering experience still rooted too firmly to biography, unwilling to let the art take seed. But even in these, Weiner cannot contain those moments of brilliance that make a character so real we find ourselves looking for that harried mother juggling a baby and latte at our favorite coffee house or the drunk boyfriend counting beer rings at our local pub.