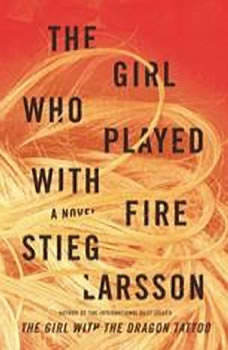 The Girl Who Played with Fire: Book 2 of the Millennium Trilogy

Mikael Blomkvist, crusading journalist and publisher of the magazine Millennium, has decided to run a story that will expose an extensive sex trafficking operation between Eastern Europe and Sweden, implicating well-known and highly placed members of Swedish society, business, and government.

But he has no idea just how explosive the story will be until, on the eve of publication, the two investigating reporters are murdered. And even more shocking for Blomkvist: the fingerprints found on the murder weapon belong to Lisbeth Salander—the troubled, wise-beyond-her-years genius hacker who came to his aid in The Girl with the Dragon Tattoo, and who now becomes the focus and fierce heart of The Girl Who Played with Fire.

As Blomkvist, alone in his belief in Salander’s innocence, plunges into an investigation of the slayings, Salander herself is drawn into a murderous hunt in which she is the prey, and which compels her to revisit her dark past in an effort to settle with it once and for all.

This is truly a can't put down. I can't wait to read his third book and am extremely sorry that he will write no more books. A great loss. His characters are complex and fascinating and is story grabs you. This was even better than Girl With The Dragon Tatoo, which I really enjoyed.

Fascinating Story Wonderfully Read. I think Simon Vance could read the phone book and enthrall me. But in this case, Vance has taken on a complicated story, with many fascinating characters and made it all work. This is an edge of your seat story that never lets up. Larsson is a very good author, but I do wonder if he isnt poking fun at the typical police proceedural novel by adding lots of tiny and totally irrelevant details. In any case, they dont get in the way or bog down the narrative.

The Girl Who Played with Fire: Book...
Millennium Series #2

The Girl in the Spider's Web
Millennium Series #4