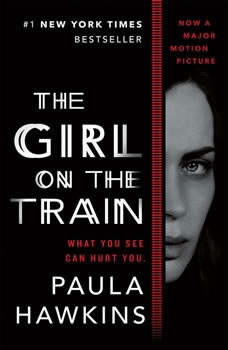 The Girl on the Train

The debut psychological thriller that will forever change the way you look at other people's lives.

“Nothing is more addicting than The Girl on the Train.”—Vanity Fair

“The Girl on the Train has more fun with unreliable narration than any chiller since Gone Girl. . . . [It] is liable to draw a large, bedazzled readership.”—The New York Times

“Marries movie noir with novelistic trickery. . . hang on tight. You'll be surprised by what horrors lurk around the bend.”—USA Today

“Like its train, the story blasts through the stagnation of these lives in suburban London and the reader cannot help but turn pages.”—The Boston Globe


EVERY DAY THE SAME
Rachel takes the same commuter train every morning and night. Every day she rattles down the track, flashes past a stretch of cozy suburban homes, and stops at the signal that allows her to daily watch the same couple breakfasting on their deck. She’s even started to feel like she knows them. Jess and Jason, she calls them. Their life—as she sees it—is perfect. Not unlike the life she recently lost.

UNTIL TODAY
And then she sees something shocking. It’s only a minute until the train moves on, but it’s enough. Now everything’s changed. Unable to keep it to herself, Rachel goes to the police. But is she really as unreliable as they say? Soon she is deeply entangled not only in the investigation but in the lives of everyone involved. Has she done more harm than good?


From the Trade Paperback edition.
Recommended

The Instant #1 New York Times and USA Today BestsellerThree bodies in a beautiful and luxurious bedroom.Billy Harney was born to be a cop. The son of Chicago's chief of detectives, whose twin sister is also on the force, Billy plays it by the book....

Private: The Royals
by James Patterson

God save the Queen-only Private can save the Royal Family.Private is the most elite detective agency in the world. But when kidnappers threaten to execute a Royal Family member in front of the Queen, Jack Morgan and his team have just 24 hours to s...

Money. Betrayal. Murder.That's a Private conversation.Hired to protect a visiting American woman, Private Johannesburg's Joey Montague is hoping for a routine job looking after a nervous tourist. After the apparent suicide of his business partner, ...

Woman of God
by James Patterson

St. Peter's Square, Rome. White smoke signals that a new Pope has been chosen.Is it possible that the new Pope...is a woman?The world is watching as massive crowds gather in Rome, waiting for news of a new pope, one who promises to be unlike any ot...

Look Behind You
by Iris Johansen

A serial killer is on the loose in San Diego, and he has a most unusual M.O.: With each kill, he leaves behind objects with unclear meanings. Most of the recent killings are centered near Kendra Michaels' home and office, so it comes as no great sur...

The Shut-In
by James Patterson

I know you're watching me.Confined to a studio apartment, Tricia Celano watches the outside world through a flying drone. But when her high-tech toy records a vicious murder, she's determined to track down the killer--a killer who knows she's being...

If you enjoy excessive detail and a slow paced storywhich I guess is British then this is a book for you. I listened to the unabridged version which was very painful for mewould have never gotten through the hardcover version. I enjoy a faster pace and detail that is important to the plot. I would recommend that if your tastes are similar to mine that you look for an abridged version of the abridged version. I dont get the high rating. I must be shallow minded but I do enjoy a good book and this definitely was not one of them.