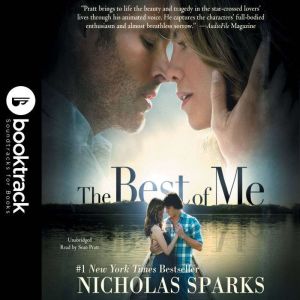 The Best of Me - Booktrack Edition

The Best of Me: Booktrack Edition adds an immersive musical soundtrack to your audiobook listening experience! *Get swept up in a timeless story of lost dreams and redemption, in which former high school sweethearts get a second chance at first love--from the #1 New York Times bestselling author of The Notebook. In the spring of 1984, high school students Amanda Collier and Dawson Cole fell deeply, irrevocably in love. Though they were from opposite sides of the tracks, their love for one another seemed to defy the realities of life in the small town of Oriental, North Carolina. But as the summer of their senior year came to a close, unforeseen events would tear the young couple apart, setting them on radically divergent paths.Now, twenty-five years later, Amanda and Dawson are summoned back to Oriental for the funeral of Tuck Hostetler, the mentor who once gave shelter to their high school romance. Neither has lived the life they imagined . . . and neither can forget the passionate first love that forever changed their lives. As Amanda and Dawson carry out the instructions Tuck left behind for them, they realize that everything they thought they knew -- about Tuck, about themselves, and about the dreams they held dear -- was not as it seemed. Forced to confront painful memories, the two former lovers will discover undeniable truths about the choices they have made. And in the course of a single, searing weekend, they will ask of the living, and the dead: Can love truly rewrite the past? *Booktrack is an immersive format that pairs traditional audiobook narration to complementary music. The tempo and rhythm of the score are in perfect harmony with the action and characters throughout the audiobook. Gently playing in the background, the music never overpowers or distracts from the narration, so listeners can enjoy every minute. When you purchase this Booktrack edition, you receive the exact narration as the traditional audiobook available, with the addition of music throughout.