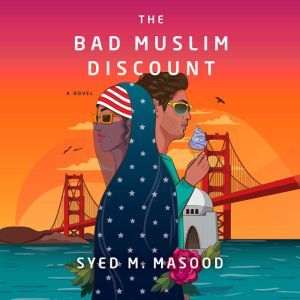 The Bad Muslim Discount: A Novel

Following two families from Pakistan and Iraq in the 90s through to San Francisco in 2016, Bad Muslim Discount is a hilarious, timely, and provocative comic novel about being Muslim immigrants in modern America. For fans of Hanif Kureshi, Mira Jacob and Mohammed Hanif.

It is 1995, and Anvar Faris is a restless, rebellious and sharp-tongued boy doing his best to grow up in Karachi, Pakistan. As fundamentalists in the government become increasingly strident and the zealots next door start roaming the streets in gangs to help make Islam great again, his family decides, not quite unanimously, to start life over in California. The irony is not lost on Anvar that in America, his deeply devout mother and his model-Muslim brother are the ones who fit right in with the tightly knit and gossipy desi community. Anvar wants more. He's tired of being a good Muslim.
At the same time, thousands of miles away, Safwa, a young girl suffocating in war-torn Baghdad with her grief-stricken, conservative father will find a very different and far more dangerous path to America. These two narratives are intrinsically linked and when their worlds come together, the fates of two remarkably different people intertwine and set off a series of events that rock their whole community to their core.
The Bad Muslim Discount is an irreverent, dramatic, and often hysterically funny debut novel by an amazing new voice. With deep insight, warmth, and an irreverent sense of humor, Syed Masood examines quirky and intense familial relationships, arranged marriage, Islamic identity, and how to live together in modern America.