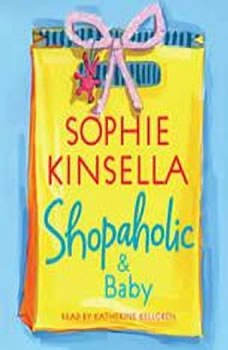 Becky Brandon’s life is blooming. She’s working at London’s newest big store, The Look, house-hunting with husband Luke (her secret wish is a Shoe Room) . . . and she’s pregnant. She couldn’t be more overjoyed—especially after discovering that shopping cures morning sickness. Everything has to be perfect for her baby: from the designer nursery and the latest stroller to top-of-the-line medical care.

But when the must-have celebrity obstetrician Becky’s been so desperate to see turns out to be Luke’s glamorous, intellectual ex-girlfriend, Becky’s perfect world starts to crumble. She’s shopping for two . . . but are there three in her marriage?

“From sonograms to the hottest baby strollers to tricked-out birthing rooms . . . Kinsella’s ode to baby blues is both sly and slapstick.”—Publishers Weekly

“Faster than a swiping Visa, more powerful than a two-for-one coupon, able to buy complete wardrobes in a single sprint through the mall—it’s Shopaholic!”—The Washington Post

“Kinsella’s heroine is blessed with the resilience of ten women, and her damage-limitation brain waves are always good for a giggle.”—Glamour (U.K.)

“As fun as a shopping spree.”—Entertainment Weekly

Four sisters, a Manhattan brownstone, and a tumultuous year of loss and courage are at the heart of Danielle Steel’s new novel about a remarkable family, a stunning tragedy—and what happens when four very different young women come tog...

You have good reason to be afraid. . . . It was a case that haunts Bobby Dodge to this day—the case that nearly killed him and changed his life forever. Now, in an underground chamber on the grounds of an abandoned Massachusetts mental hospita...

This book is the same as the rest...not great, but good enough to read cover to cover. It moves quickly and has its share of funny moments. Ths shopaholic formula remains the same and I am figuring out the plot faster with each book this one probally took about 20 pages. I still keep reading though and I will read the next as well.

Another great read in Shopaholic series. Hope there is a sequel to this one. Quick read.