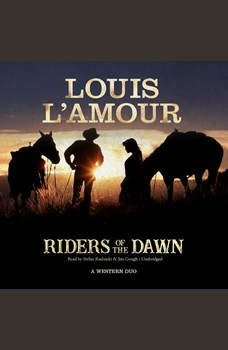 Riders of the Dawn: A Western Duo

"Ride, You Tonto Raiders" Matt Sabre is a young and experienced gunfighter-but not a trouble seeker. But when Billy Curtin calls him a liar and goes for his gun, Matt has no choice but to draw and fire. To his surprise, the dying man gives him $5,000 and begs him to take the money to his wife, who is alone in defending the family ranch in the Mogollons. A combination of guilt, regret, and wanting to do the right thing leads Sabre to make that ride. "Riders of the Dawn" A young gunslinger is changed for the better by meeting a beautiful woman. A classic range-war Western, this novel features that powerful, romantic, strangely compelling vision of the American West for which L'Amour's fiction is known. In the author's words, "It was a land where nothing was small, nothing was simple. Everything, the lives of men and the stories they told, ran to extremes." This story is one of Louis L'Amour's early creations that have long been a source of speculation and curiosity among his fans. Early in his career, L'Amour wrote a number of novel-length stories for the pulps. Long after they were out of print, the characters of these early stories still haunted him. It was by revising and expanding these stories that L'Amour would create his first novels.