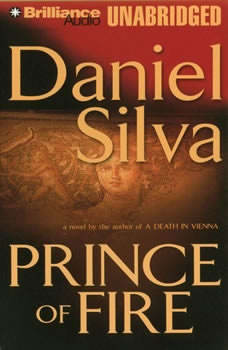 Few recent thriller writers have elicited the kind of critical praise that Daniel Silva has received, with his “provocative and deeply satisfying” (The Miami Herald) novels featuring art restorer and sometime spy Gabriel Allon, “a man whose depth and passion make him one of the most fascinating characters in the genre” (Chicago Sun-Times).Now Allon is back in Venice, when a terrible explosion in Rome leads to a disturbing personal revelation: the existence of a dossier in terrorist hands that strips away his secrets, lays bare his history. Hastily recalled home to Israel, drawn once more into the heart of a service he had once forsaken, Allon finds himself stalking an elusive master terrorist across a landscape drenched with generations of blood, the trail turning on itself until, finally, he can no longer be certain who is stalking whom. And when at last the showdown comes, it will not be Gabriel alone who is threatened with destruction—for it is not his history alone that has been laid bare.A knife-edged thriller of astonishing intricacy and feeling, filled with exhilarating prose, this is Daniel Silva’s finest novel yet.

A good book but not the best I've read by Silva. The plot seems to get bogged down. If you haven't read the previous books in the series, it could be hard to understand what's happening, also. I'm a Daniel Silva fan but this one just isn't up to par.