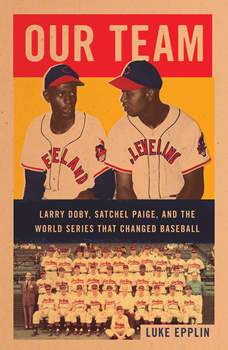 Our Team: The Epic Story of Four Men and the World Series That Changed Baseball

Luke Epplin's Our Team is an exciting, and too-little-known, baseball story--the tale of the first team with African-American players to win the World Series.

The integration of baseball is justly remembered through the prism of Jackie Robinson and the Brooklyn Dodgers. Yet there is a triumphant, and pivotal, narrative from those fraught years that has long been overlooked: the story of the 1948 Cleveland Indians.

This team featured two black players, Larry Doby and Satchel Paige, and in only the second year of integrated baseball, they won a championship. These two men represent different facets of the African-American experience. Doby, a young World War II veteran whose parents had been part the Great Migration, integrated the American League only 11 weeks after Robinson. He suffered the same indignities (as he recalled, “Nobody said we’re going to be nice to the second black”), but never received the aura of legend that could come only from being first. Paige meanwhile was a legend in his own time, an Alabama gardener’s son who became the greatest pitcher in Negro League history. When signed by the Indians to help lead them to the playoffs, he was forty-two, the oldest rookie ever.

These two compelling figures are at the center of a baseball story that also includes the owner of the Indians, Bill Veeck, the most colorful owner in baseball, and the Hall of Fame pitcher (and complicated human) Bob Feller. For fans of David Halberstam, Bill James, and Roger Angell, here is a new baseball classic.

"Epplin’s epic saga is simultaneously a riveting drama and a searing portrait of the racism that plagued baseball for decades. This sharp and well-documented history will be a hit with baseball lovers and general interest readers alike." -- Publishers Weekly, starred review