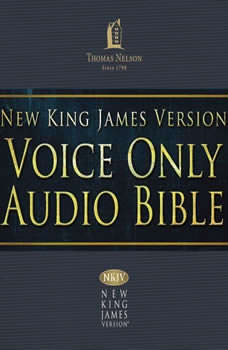 Beautifully narrated by famed story teller Bob Souer, The NKJV Voice Only Audio Bible features all of the books of the Bible in one easy download. Digitally enhanced for improved clarity, The NKJV Voice Only Audio Bible offers top quality at an affordable price. Allow the Word of God to wash over you as you drive to work, or listen as you sink into your favorite chair with a hot cup of coffee. With Souer’s simple, yet vivacious narration, there is nothing to distract you, allowing you easy access to His word on-the-go, for one low price.

Features Include:
• New King James Version®- today’s most trusted translation
• Full Bible in one quick, easy download
• Easily burned onto disk, or loaded onto MP3 player for maximum portability
• Digital re-mastering brings unprecedented clarity and audio quality
• Location markers make finding and keeping your place as you listen as easy as hitting “fast forward” or “reverse”
• Voice-only narration removes distraction of sound-effects, allowing you to plunge into the text with no muss or fuss

This faithful rendering of the New King James Version® presents the Bible in more than 90 hours of compelling, dramatic audio theater format.This world-class audio production immerses listeners in the dramatic reality of the Scriptures as never ...

Book of Daniel Audiobook: From The Revised Geneva Translation
by Steve Cook

This is a full, unabridged, uninterrupted version of The Book of Daniel, read by best-selling faith-based narrator, Steve Cook. It contains no commentary or other human adornment; only the pure, living Word of God; profitable for teaching, convictin...

Book of Ruth Audiobook: From The Revised Geneva Translation
by Robert J. Bagley

The Geneva Bible is an Elizabethan-era synthesis of Scripture, based largely on William Tyndale and Myles Coverdale's early 16th century translations of the received Greek, Aramaic and Hebrew texts. It is 85% similar to the King James Bible. However...

Book of Esther Audiobook: From The Revised Geneva Translation
by Robert J. Bagley

The Geneva Bible is an Elizabethan-era synthesis of Scripture, based largely on William Tyndale and Myles Coverdale's early 16th century translations of the received Greek, Aramaic and Hebrew texts. It is 85% similar to the King James Bible. However...

Book of Revelation Audiobook: From The Revised Geneva Translation
by Steve Cook

This is the full, uninterrupted reading of the Book of Revelation, performed by 5-time #1 Best Selling Faith-based Narrator, Steve Cook. The word Revelation, according to Webster’s, is, “an act of revealing or communicating divine tru...

<p>Bring the Bible into your daily activities with this single-voice version of the complete Bible in the NKJV. With clear and uncluttered narration from Audie Award&ndash;winning narrator Simon Bubb, this Bible speaks plainly and makes i...

I give a Zero Rating because The Audio files in the Downloaded NKJV Voice Only Audio Bible Audio files are not named like they should with Book Name and Chapter on each one.It just says a number 1-347 and says unknown for a filename on each one so if you want to hear The Book of Job you have to go play each of the file's until you hear it say its the book of Job. If you don't mind not having file names then this is for you or if you want file names you will have to go rename every file that's 347 files and you have to play each one to know what to name it and each file has 3-4 chapters in one file.Very Annoying better to buy the cd or Mp3 DVD version and have it sent to you in the mail or buy it from a a walk in store.Hope to save someone else the hassle I went threw.