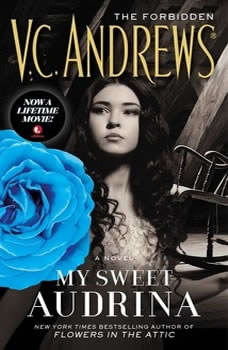 V.C. Andrews has enthralled millions with her suspenseful, gothic family sagas, including the bestselling Dollanganger series that began with Flowers in the Attic. Now, one of her strangest, most beloved classics My Sweet Audrina—a haunting story of love and deceit, innocence and betrayal, and the suffocating power of parental love—is soon to be a major Lifetime movie event.The idea of her sister hovered above them all. Audrina fiercely desired to be as good as her sister. She knew her father could not love her as he loved that other girl, for her sister was so special, so perfect—and dead. Upstairs in a locked room awaited her sister’s clothes and dolls, her animals and games—and her sacred rocking chair. Now Audrina will rock and rock and rock to reclaim all of her gone sister’s special gifts. And then finally she’ll learn the secrets everyone else knows but her.

Jason Roberts knows how to take a hit, and he has taken plenty: both from the boys at his high school, and from his deadbeat, drug-dealing father. But Jason has learned to give as good as he gets, and his reputation as the school tough guy has made ...

If There Be Thorns
by V.C. Andrews

Chris and Cathy made such a loving home for fourteen-year-old Jory -- so handsome, so gentle. And for Bart,who had such a dazzling imagination for a nine year old. Then the lights came on in the house next door. Soon the Old Lady in Black was there...

The Things You Kiss Goodbye
by Leslie Connor

Bettina Vasilis can hardly believe it when basketball star Brady Cullen asks her out, and she just about faints when her strict father actually approves of him. Over the course of the summer, Bettina falls in love with Brady . . . and with the new ...

Pretty girl13 when shewent missinglostto her familyto her friendsto the worldfoundbut still missingher selfIn Liz Coley's alarming and fascinating psychological mystery, sixteen-year-old Angie Chapman must piece together the story of her kidnap...

Seeds of Yesterday
by V.C. Andrews

The final, haunting novel, in the extraordinary story that has enthralled millions! The horror began with Flowers in the Attic, the terrifying tale of four innocent children locked away from the world by a cruel mother. The shocking fury continued...

What Jamie Saw
by Carolyn Coman

Aria's life is full of secrets--secrets about her mother's death, her father's cruelty, and her dream to go to Juilliard. When Aria meets Thomas, he draws out her secrets, captures her heart, and gives her the courage to defy her father. But when tr...

The Children and the Wolves
by Adam Rapp

Genius girl, Bounce, and her two drifter sidekicks, Wiggins and Orange, are holding the Frog hostage. As the stakes grow higher and the guilt and tension mount, Wiggins begins to question his complicity and must choose where his loyalties lie. Not f...

The Lottery Rose
by Irene Hunt

Georgie Burgess has known only neglect and abuse during his seven and a half years of life. His alcoholic mother does little to prevent the bruises and scars inflicted on Georgie by her brutal boyfriend. With each blow, the little boy withdraws furt...