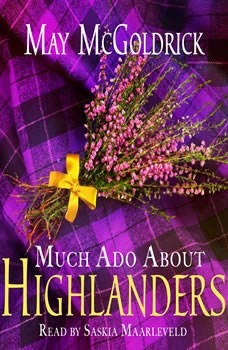 Much Ado About Highlanders

In the heart of Scotland, this Highlander is about to meet his match in bestseller May McGoldrick's Much Ado About Highlanders.Highland warrior Alexander Macpherson has lost his wife. When he agreed to take Kenna Mackay as his bride to advance his clan’s power in the north, he expected a bit of an adjustment. He didn't expect the sharp-tongued beauty to run away on their wedding night. Still, Alexander wants his runaway bride…and he has the sneaking suspicion that she wants him, too.Kenna Mackay thought she was safe in a priory full of nuns learning the craft of healing, but when she is kidnapped by her own husband, the battle of wits begins anew. But even as passions ignite, a deadly secret from Kenna's past rises to the surface and put their new love in jeopardy. As a heartless villain closes in, two headstrong lovers find themselves locked in a struggle between evil and the power of undying love. And this time, Alexander is determined he will not lose his wife again.

Much Ado About Highlanders
The Scottish Relic Trilogy #1

Tempest in the Highlands
The Scottish Relic Trilogy #3