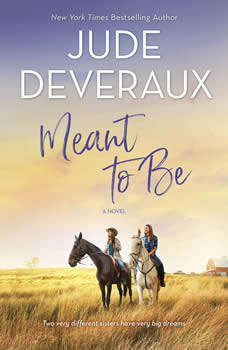 New York Times bestselling author Jude Deveraux has crafted an inspiring family saga that spans generations as she tells the story of two headstrong sisters who are bound by tradition but long to forge their own path.

It’s 1972 and times are changing. In the small farming community of Mason, Kansas, Vera and Kelly Exton are known for their ambitions. Vera is an activist who wants to join her boyfriend in the Peace Corps. But she is doing her duty caring for her widowed mother and younger sister until Kelly is firmly established. Kelly is studying to become a veterinarian. She plans to marry her childhood sweetheart and eventually take over his father’s veterinary practice.

But it’s a tumultuous time and neither sister is entirely happy with the path that’s been laid out for her. As each evaluates her options, everything shifts. Do you do what’s right for yourself or what others want? By having the courage to follow their hearts these women will change lives for the better and the effects will be felt by the generations that follow. Meant to Be delivers an emotional, smart, funny and wise lesson about the importance of being true to yourself.

Between The Records
by Julian Tepper

The Imperfects
by Amy Meyerson

The Moonglow Sisters
by Lori Wilde

The Deeper the Water the Uglier the F...
by Katya Apekina