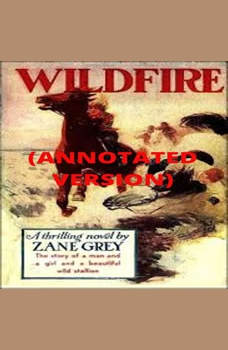 Horse Hunter Lin Sloan required just the Wild Stallion which he called wildfire. Lucy Bostil found the Horse and the negligent man who had roped him. She Saved Both their lives and took Sloan's heart at the same time. By and by another man needs Lucy and horse - and will stay decided short of executing to get them.

ABOUT ZANE GREYPearl Zane Grey (January 31, 1872 – October 23, 1939) was an American author and dentist best known for his popular adventure novels and stories associated with the Western genre in literature and the arts; he idealized the American frontier. Riders of the Purple Sage (1912) was his best-selling book.In addition to the commercial success of his printed works, his books have had second lives and continuing influence when adapted as films and television productions. His novels and short stories have been adapted into 112 films, two television episodes, and a television series, Dick Powell's Zane Grey Theater.While Dolly managed Grey's career and raised their three children, including son Romer Zane Grey, over the next two decades Grey often spent months away from the family. He fished, wrote, and spent time with his many mistresses. While Dolly knew of his behavior, she seemed to view it as his handicap rather than a choice. Throughout their life together, he highly valued her management of his career and their family and her solid emotional support. In addition to her considerable editorial skills, she had good business sense and handled all his contract negotiations with publishers, agents, and movie studios.