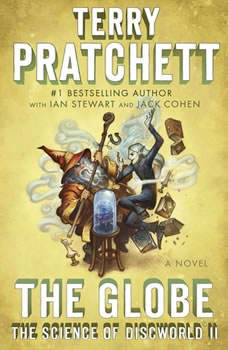 The Globe: The Science of Discworld II: A Novel

Roundworld, aka Earth, is under siege. Are three wizards and an orangutan Librarian enough to thwart the Elvish threat?

When the wizards of Unseen University first created Roundworld, they were so concerned with discovering the rules of this new universe that they overlooked its inhabitants entirely. Now, they have noticed humanity. And humanity has company. Arriving in Roundworld, the wizards find the situation is even worse than they’d expected. Under the elves’ influence, humans are superstitious, fearful, and fruitlessly trying to work magic in a world ruled by logic. Ridcully, Rincewind, Ponder Stibbons, and the orangutan Librarian must travel through time to get humanity back on track and out of the dark ages.

The Globe goes beyond science to explore the development of the human mind. Terry Pratchett and his acclaimed co-authors Ian Stewart and Jack Cohen combine the tale of the wizards rewriting human history with discussions of the origins and evolution of culture, language, art, and science, offering a fascinating and brilliantly original view of the world we live in.