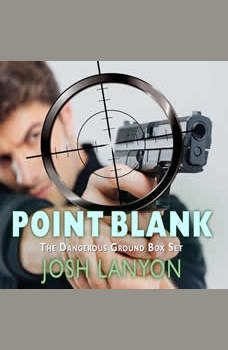 The first five Dangerous Ground novellas collected in digital (and audio) for the first time! PLUS, in the digital version you get two fan exclusives: an interview with "David Bradley" and an interview with Will and Taylor.

Dangerous Ground - Special Agents for the Department of Diplomatic Security, Taylor MacAllister and Will Brandt have been partners and best friends for three years, but everything changed the night Taylor admitted the truth about his feelings for Will. But it's complicated...

Old Poison - Happy Birthday, Taylor! Taylor has pretty well recovered from his shooting, but not everyone is happy to see him reach his next birthday.

Blood Heat - Special Agents for the Department of Diplomatic Security, Taylor MacAllister and Will Brandt find their new relationship is threatened when Will is offered a plum two-year assignment in Paris. It's a bad time to find themselves in the middle of the New Mexico wilderness responsible for the health and welfare of a suspected terrorist.

Dead Run - The boys are back in town--and Paris is burning! For Special Agents of the Department of Diplomatic Security, Taylor MacAllister and Will Brandt, the strain of a long distance relationship is beginning to tell after eleven months of separation. A romantic holiday could be just the thing to bridge the ever-growing distance, but when Taylor spots a terrorist from the 70s, long believed dead but very much alive, it's c'est la vie.

Kick Start - Will is finally braced to bring Taylor home to meet the folks. Unfortunately, not every member of the Brandt clan loves Taylor the way Will does. Then again, not everyone loves the Brandts. In fact, someone has a score to settle--and too bad for any former DS agents who get in the way when the bullets start to fly.