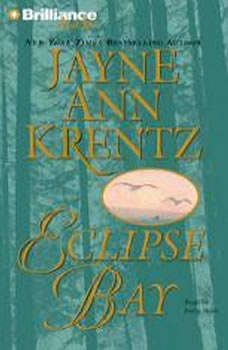 Eclipse Bay has grown and flourished on the rugged Oregon coast, where the shore can be rocky and forbidding, full of sharp cliffs and hidden coves. But this small town is also filled with secrets as treacherous as the landscape - and rivalries as fierce as an ocean storm. . . Their grandfathers hated each other. Their fathers hated each other. And as the next generation of Hartes and Madisons, Hannah and Rafe are expected to hate each other too. But Hannah Harte - a successful wedding consultant with a skeptical view of marriage - remembers the long-ago night on the beach that revealed Rafe as much more than just "that disreputable Madison boy." And Rafe remembers the heroic gesture that proved Hannah's fierce spirit was stronger than any feud - and saved him from near-certain imprisonment. Now - reunited by a surprising inheritance after years of living their separate lives - Rafe and Hannah return to Eclipse Bay, and the hostilities that still divide, and bind, their families. And they are discovering something that is at once delightful and deeply disturbing . . . They don't hate each other. Not at all. . .

Book One of the Gallaghers of Ardmore TrilogyIn Gallagher’s Pub, where the fire is burning low and the pints are waiting, #1 New York Times bestselling author Nora Roberts has a story to tell....Determined to reevaluate her life, Jude Murray f...

Daring to Dream
by Nora Roberts

Margo Sullivan had everything a young woman could ask for. But while growing up along the rocky cliffs of Monterey, she couldn't help but dream of bigger things. The daughter of the Templeton's stern Irish housekeeper, Margo had been treated like ...

Olivia's parents had been one of Hollywood's glittering golden couples...until the night the monster came. The monster who destroyed their beautiful home and took her mother away from her forever. The monster with the face of her father... Now a yo...

The Alibi
by Sandra Brown

Born into a fine old Charleston family, Hammond Cross is determined to be the city's next district attorney-without sacrificing his integrity. Prosecuting the sensational murder of real estate magnate Lute Pettijohn could be his ticket into the offi...