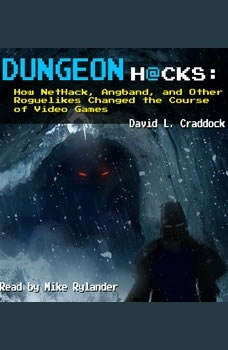 Dungeon Hacks: How NetHack, Angband, and Other Roguelikes Changed the Course of Video Games

In 1980, computers were instruments of science and mathematics, military secrets and academia. Stern administrators lorded over sterile university laboratories and stressed one point to the wide-eyed students privileged enough to set foot within them: Computers were not toys. Defying authority, hackers seized control of monolithic mainframes to create a new breed of computer game: the roguelike, cryptic and tough-as-nails adventures drawn from text-based symbols instead of state-of-the-art 3D graphics. Despite their visual simplicity, roguelike games captivate thousands of players around the world. From the author of the bestselling Stay Awhile and Listen series, Dungeon Hacks introduces you to the visionaries behind some of the most popular roguelikes of all time, and shows how their creations paved the way for the blockbuster video games of today—and beyond.

The Internet of Things
by Samuel Greengard

We turn on the lights in our house from a desk in an office miles away. Our refrigerator alerts us to buy milk on the way home. A package of cookies on the supermarket shelf suggests that we buy it, based on past purchases. The cookies themselves ar...

The goal of data science is to improve decision making through the analysis of data. Today data science determines the ads we see online, the books and movies that are recommended to us online, which emails are filtered into our spam folders, and ev...

Life after Television
by George Gilder

In this remarkably prescient book, Gilder predicts how television will merge with other technologies and evolve into the telecomputer, a personal computer adapted for video processing and connected by fiberoptic threads to other personal computers a...

Jobs in data science abound, but few people have the data science skills needed to fill these increasingly important roles. Data Science For Dummies is the perfect starting point for IT professionals and students who want a quick primer on all areas...

Dawn of the New Everything
by Jaron Lanier

"[Oliver Wyman] narrates in a reflective tone that fits well with Lanier's mix of recollections, philosophy, and explanations of technology...Lanier takes the listener through VR breakthroughs like Nintendo's Power Glove and delves into the psycholo...

Cloud Computing
by Nayan B. Ruparella

Most of the information available on cloud computing is either highly technical, with details that are irrelevant to non-technologists, or pure marketing hype, in which the cloud is simply a selling point. This book, however, explains the cloud from...

Unique prospective on the big data analytics phenomenon for both business and IT professionals The availability of Big Data, low-cost commodity hardware and new information management and analytics software has produced a unique moment in the histo...

The History of the Future
by Blake J. Harris

The dramatic, larger-than-life true story behind the founding of Oculus and its quest for virtual reality, by the bestselling author of Console Wars.From iconic books like Neuromancer to blockbuster films like The Matrix, virtual reality has long b...

The Technological Singularity
by Murray Shanahan

The idea that human history is approaching a "singularity" -- that ordinary humans will someday be overtaken by artificially intelligent machines or cognitively enhanced biological intelligence, or both -- has moved from the realm of science fiction...