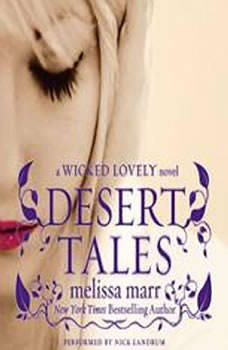 Return to the world of Melissa Marr's bestselling series and discover how the events of Wicked Lovely set a different faery tale in motion. . . .The Mojave Desert was a million miles away from the plots and schemes of the faery courts—and that's exactly why Rika chose it as her home. The once-mortal faery retreated to the desert's isolation after decades of carrying winter's curse inside her body. But her seclusion—and the freedom of the desert fey—are threatened by the Summer King's newfound strength. And when the manipulations of her trickster friend, Sionnach, thrust Rika into a new romance, she finds new power within herself—and a new desire to help Sionnach protect the desert fey and mortals alike. The time for hiding is over.Originally presented as a manga series and now available for the first time as a stand-alone novel, Desert Tales combines tentative romance, outward strength, and inner resolve in a faery story of desert and destiny.

This is one of those fairy tales meets the modern world stories that I have always had a weakness for, however, if you don't care for that I don't recommend this book. If you do like these kinds of stories it's definitely for you. It's a little slow in places, but I found myself really liking the heroine and how she never gave up. The Keenan character is an irritating little wretch, but it wouldn't be much of a story without that I suppose.

Melissa Marr works with traditional British and Celtic fairy tale and folk tale traditions to create this modern coming-of-age novel. I won't summarize the plot because you can easily read that elsewhere. If you like Holly Black's novels, you'll like Marr's. Reasons that I thoroughly enjoyed Marr's debut novel: 1. Her characters are always aware of their responsibilities to others rather than being driven by selfish desires. Even Keenan, the Summer King who is desperately searching for his Queen, wants to save the mortal and faerie worlds from permanent winter. 2. Marr's done her research and so enables her work to fit within the larger historical tradition. The quotes she uses to introduce each chapter foreshadow what will come without giving away the details. Towards the end I was trying to guess where the plot would go, based on the quotes, and failed. 3. No scenes detailing sex, drug and/or alcohol abuse, friends making smart remarks for pages and pages -- these elements are certainly present but are alluded to as part of the larger world rather than lingered over as crucial plot elements. In other words, Marr's not tryiing to write another of the paranormal romances currently popular. I enjoy those too but don't remember them once I've closed the book. 4. Marr portrays the interlocking worlds that make up the real world. Teens/young adults all move between school, a social life, a job, and family. Each has its own characters, rules, and expectations for behavior. I really liked how Marr gave a sense of each without including prolonged, boring descriptions or just limiting herself to one.

I absolutley adore this book but i think its bias reason for my love of this book is my love of fairys and fantasy in general. This would be a world Id love to live in.