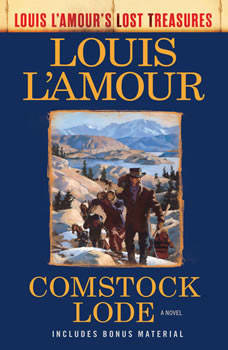 It was just a godforsaken mountainside, but no place on earth was richer in silver. For a bustling, enterprising America, this was the great bonanza. The dreamers, the restless, the builders, the vultures—they were lured by the glittering promise of instant riches and survived the brutal hardships of a mining camp to raise a legendary boom town. But some sought more than wealth. Val Trevallion, a loner haunted by a violent past. Grita Redaway, a radiantly beautiful actress driven by an unfulfilled need. Two fiercely independent spirits, together they rose above the challenges of the Comstock to stake a bold claim on the future.

No Man's Man
by Louis L'Amour

Passion drives Lou Morgan to the town of Battle Basin--passion and the promise of $5000. For in this dusty town lives the wildly irresistible Nana Maduro, the woman Morgan loved enough to kill for, the woman who walked away from him without a word. ...

The Sky-liners
by Louis L'Amour

In The Sky-Liners, Louis L’Amour introduces Flagan and Galloway Sackett, heading west from Tennessee to seek their fortunes. That’s when they came across an old Irish trader who offered them two fine horses if they would agree to escort ...