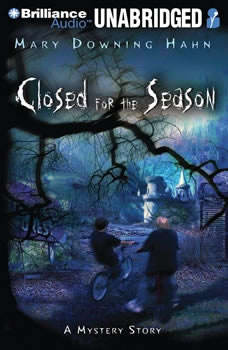 Closed for the Season

The weather-beaten sign on the gate of the Magic Forest says closed for the season. But when the boys ride up to the gate on their bikes, Arthur tells his new friend, Logan, that the old amusement park hasn’t been open for years. Kudzu vines have grown over everything, making the park look sinister even in broad daylight, so Logan is reluctant to go inside, but Arthur urges him on. He’s sure they’ll discover important clues to the mystery they’re trying to solve: Who killed Myrtle Donaldson? And what happened to the money she handled as head bookkeeper at the Magic Forest? Arthur and Logan’s quest takes them to the lowest — and highest — levels of society in their small Virginia town. The boys must pay another visit to the Magic Forest, this time in the middle of the night. And this time they find the killer waiting for them among the shadowy kudzu vines.