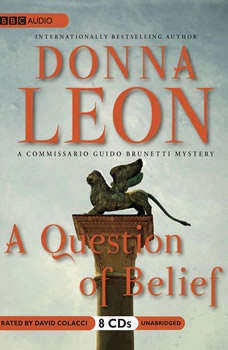 A Question of Belief

Commissario Guido Brunetti must contend with ingenious corruption, bureaucratic intransigence, and the stifling heat of a Venetian summer. As he plans a trip to the mountains with his family, he learns that cases at the local courthardly known as a model of efficiencyare being delayed to the benefit of one of the parties. A creative new trick for corrupting the system, perhaps, but what can Brunetti do about it? Just when it looks like he will be able to get away, a shocking, violent crime forces him to stay in Venice.

This story was so boring that after 3 cd's I stopped and shipped it back.

A Question of Belief
A Commissario Guido Brunetti Myster...